Before we discuss what a PrepSteader is, lets talk about how they fit in with the Alabama Militia. Our PrepSteaders are usually members that have little or no interest in military or public safety training. A majority of our PrepSteaders are family members of Militia members, but that is not a requirement. They consist of members who have skills such as Food Storage and Preparation, Shelter Construction, Medical Experience, Herbalists, and other skills that make survival easier, and are willing to teach these skills to others. Most Militias only have Militia Members, but no logistical or support systems in place that would make long term deployment possible. Our families are VERY IMPORTANT to us. The PrepSteaders insure that the children are cared for and are safe during emergencies as well.

If Alabama Militia deploys to a disaster area, the PrepSteaders provide security of the Operations Center, insure that everyone is fed and has a place to rest, and in the event someone is injured, they can provide First Aid and care until a medical professional is available. They are the Key to sustaining the Alabama Militia in the event of an emergency. PrepSteaders are an integral part of the Alabama Militia and support the Militia just as much as the Militia supports the PrepSteaders. One without the other would just be another Prepper group or a generic Militia.

Now... What is the difference between a homesteader, a prepper, and a survivalist? Some people lump them all in one category, and there are certainly overlaps. In fact, self-reliance is a definite theme for all of them. Stereotypes always get in the way when these terms are brought up. Why not just accept that they are normal people that have a different view of their future?

If you are the kind of person who loves being able to handle your life without help from others….chances are you are a homesteader.

Preppers definitely fall on a continuum. There are “hard-core” preppers who literally put their life savings into their efforts. And there are those who just want to have a couple of weeks of food and water stored up, just in case. So, a prepper is a person who feels the need to be ready for a disaster of some kind. It may be short-term or long-term.

A survivalist has developed skills to be able to live completely off the land. To defend himself and family, often in some pretty violent ways if need be.

All three groups can benefit from the others skills: some preppers could take a cue from the homesteaders as far as industry is concerned, while some homesteaders might feel more secure if they put some of the preppers defensive precautions into effect. In fact, we could all learn a lesson from both sides: Being a bit more self-sufficient and having both a solid first aid kit and a week’s worth of food and water just in case wouldn’t do anyone any harm. 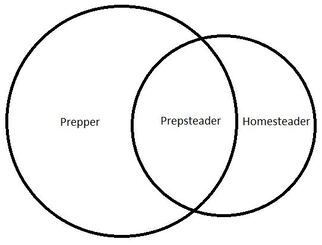 Alabama Militia has chosen a better way to represent these groups with a focus on Preppers and Homesteaders. To get the best of both worlds, we use the term Prepsteader. Each group benefits from the other, one group can teach each other new things, and all of these skills support the Militia. You do not have to have or want military training to be a part of the Alabama Militia. All of our members are one group and work to support each other. There is plenty of room for everyone if everyone helps each other.

Prepsteaders will learn the basics of defense as that may be needed someday, but that task falls on the Militia itself. Prepsteaders fall under our S4 Supply section and use their skills and knowledge to support and provide for the Alabama Militia as a whole.